An Interview with Mari Kurisato, Writer and Digital Illustrator at MariKurisato.com

An Interview with Mari Kurisato, Writer and Digital Illustrator at MariKurisato.com 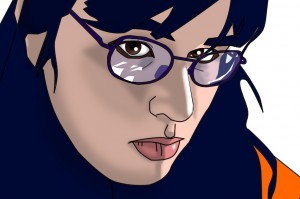 Tell me about your writing and digital illustration?

My writing and illustration are two sides of the same coin; a way to express myself visually. You might not think writing is naturally “visual,” but it definitely can be. I see fantastic, crazy worlds, and both my art and writing are my best attempts to show that world to everyone else, even when it’s just a silly digital painting of President Obama as Superman or a short story excerpt. The illustration began as a hobby, then when I quit my job as a teacher for a Big Name Tech Company, I just started doing the digital illustration for friends, who surprised me by paying for them. I’ve been doing that ever since.

What was your first work?

My first written work under this pseudonym is my currently unpublished novels. I might be releasing short stories on my website later. My first digital illustration was a fan art piece from the film Ghost in The Shell, of a mechanized tank. I’m weird that way.

What is the biggest tip you would give to a newbie digital illustrator?

Practice practice practice, off the computer. Draw with your hands, and learn composition, design. Take life drawing classes, or visit http://posemaniacs.com/ and do hand drawing every day. Study the tutorials at http://www.merekatcreations.com/ every day, and look to open source software if you can’t afford Photoshop or Illustrator.

What do clients do that you wish they wouldn’t?

Honestly, my clients are pretty savvy; but if I had to postulate a hypothetical list it would be in my case sending low res photographs, or not coming to the table with a clear idea of what they want, and then complaining that I just don’t get them.

What do illustrators do that you wish they wouldn’t?

I’m guilty of this of selling my skills or myself short. I don’t do it in the business setting, but I’m often nail biting when I send a comp for review, and if the client doesn’t like it, I tend to take it that the client doesn’t like me, which is silly, but almost always my first emotional reaction. I’ve gotten better at getting the emotional distance, but I think all artists can relate to it even just a bit.

Where do you see growth in the illustrator field?

As the Internet creates new opportunities to present visual information and technology allows for closer connections, the landscape of opportunities will change—take me for instance, almost all of my clients are word of mouth referrals from Twitter. I definitely think agile freelancers will have better opportunities to create niche markets rather than react to them than traditional agency artists.

It’s a small silly thing but in day to day life offline, I smile and presume everyone I meet has positive intent, even if we misunderstand each other. Question my own beliefs, a lot, as well. If my ideals can’t withstand regular questioning, what good are they?

What do you do that is green?

Use power sources that draw less energy from the grid, unplug anything when I’m not using them, buy paper that is recycled and made from Wind Powered factories, and just this year I’ve eliminated all paper interactions, no invoices, bills or any paper whatsoever…all artwork is delivered digitally. That and I share a car and rarely drive anywhere anyway. Public Transportation for the win. Of course, we can all do more to help be green. I need to do more.

The snarky, extroverted, opinionated version of me on Twitter is a complete act. In real life I’m painfully shy, I don’t use the phone, or really talk to people in person. I’m very much a private person, trying to be anonymous and off the info-grid, like Masamune Shirow. Crazy huh?

There are far too many to list. But I’m a big fan of Haruki Murakami. After Dark is a great book of his.

What is on your iPod?

What events do you go to?

How do you prefer to communicate?

Who would you recommend, and why?

Gerri, AKA @absolutelytrue not only provides very interesting content, but she’s a hell of a person. I mean, if you ever needed the best person on the planet to be your friend, well, that would be me, but she would be in second place, at least.

Susan AKA @BuzzEdition, because she is one of the nicest people who also just happens to be a real social media maven; she doesn’t call herself an expert, but when it comes to networking and being awesome, she’s it. How she manages to keep track of a billion people and be their friend is beyond me, but she does, and she’s really sweet.

@krystynchong, because she’s just an amazing soul. That, and she loves video games, like Team Fortress 2 and Rock Band. Sweet super smart gamer gal? What’s not to love?

Erica Friedman aka @Yuricon is directly responsible for helping bring great lesbian oriented manga and anime to this country, which is AWESOME. Plus she’s hilarious and saber sharp.

Andrew Sorcini AKA @MrBabyMan of social media fame. Co-host of the Drill Down podcast, he along with Mu, and Lidija Davis is really the only podcast creator that I’ll make time to tune in live for. Plus, he’s really a nice guy.

Reg Saddler, AKA @Zaibatsu also appears on the TDD, but deserves his own special mention because he lives in the same city I do and even though he gets very goofy sometimes he is a real class act.

Joel Mackey AKA @WebAddict is one of those rare recommendations where despite the fact that I don’t get along with him at all. he provides a really interesting point of view that challenges my own. He can be a touch sensitive, but he’s really direct and has many good points on his blog.

My last recommendation is @RayBeckerman a copyright lawyer taking the fight to the RIAA and exposing their sham copyright infringement lawsuits. He’s a great voice on Twitter, and always challenges me to think further through an issue.

Take a look at my artwork, and say hi to me on Twitter!

6 comments on “An Interview with Mari Kurisato, Writer and Digital Illustrator at MariKurisato.com”