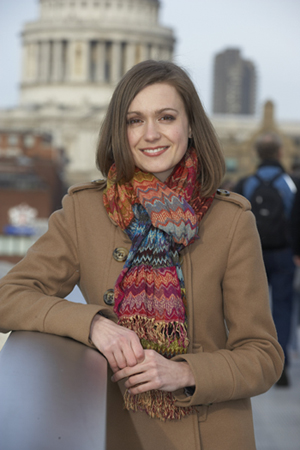 Tell me about your BBC Save our Sounds?
Save Our Sounds is a BBC World Service initiative in which we attempt to create an audiomap of the world. It was inspired by a couple of documentaries in the Discovery series about “acoustic ecology” – studying the world through sound, preserving endangered sounds, studying soundscapes etc. We were really interested in the idea of this and thought we’d open it up to the world and get people involved. There are so many photographs and words chronicling the history of the planet, but people take sound for granted. I’ve been asking people to stop and listen for a moment and appreciate the sounds around them, and then record some of the ones that they think are endangered.

We’ve got an interactive map which allows you to upload sounds that you’ve captured and place them on the map exactly where they were recorded. You can then listen your way around the world via the sounds that other people have already added. The online upload tool is really simple to use, and if you’ve an iPhone then you can use Audioboo to record your sound. Tagging it with “bbc_sos” means it will get automatically added to the right place on the map thanks to the geolocation on the phone. Clever stuff.

I’ve been setting “Sound Scavengers” challenges to help people decide what sounds to send in and there’s also “Desperately Seeking Sounds”, which is a bit like lonely hearts really! People write in and describe a sound they miss and we see if anyone in the community can record it for them – audio match-making if you will!

We’re especially interested in preserving endangered sounds – things that may be part of the everyday soundscape but that may disappear in future. Be it the call of South African corn sellers, the sound of a 56k modem or the atmosphere in a village that’s about to be bulldozed to make way for some tower-blocks.
www.bbcworldservice.com/saveoursounds
Listen to the documentaries here: http://www.bbc.co.uk/worldservice/specialreports/2009/07/090701_discoverydocinfo.shtml

What was your experience of and using BBC Save our Sounds social media?
As fas as I know I’m the first ever”microblogger in residence” at the BBC and that’s pretty exciting. I’ve been using Twitter to try and reach an audience that wouldn’t normally tune in to the BBC World Service. I think some people probably think it’s a bit old-fashioned here and I’ve been trying to break out of that and really build up a good community online. It’s been great – we’ve over 1000 followers who interact, re-tweet things, and most importantly, have been sending in their sounds to the map too.

Tell me about your other projects?
At the moment all my efforts have been focussed on Save Our Sounds, but I’ve a few cracking ideas on the back burner for when I have a bit more time on my hands. I’m excited about what comes next. Guess I’ll need to work on learning web-design, or convincing others the join in with my mad-cap schemes!

What is the biggest tip you would give to a newbie in social media?
It’s a conversation – listen, learn and contribute.

Where do you see growth in the social media field?
I think that people are going to find increasingly clever ways to use crowd-sourcing and it’l be linteresting to see how this will change the traditional news models.

What do you do to improve the world?
I save sounds! 🙂

What do you do that is green?
Recycle fanatically, have a compost heap, don’t own a car, walk or take public transport everywhere.

What is one thing about you that not many people know?
I was pen-friends with Tony Hart for 15 years.

What is on your iPod?
Nothing at the moment – it’s given up the ghost! Usually a fairly eclectic mix of tunes, a bunch of BBC podcasts and always The Hitchhiker’s Guide to the Galaxy

How do you prefer to communicate?
It depends on the situation, but you can’t beat good one-on-oneface-to-face time with those that you care about.

Who would you recommend, and why?
Ben Goldacre, for taking on the muppets
Paul Carr, for his biting wit
Chris Applegate, a bright spark in social PR
Tom Phillips, amazing ability to find weird and wonderful web stories
Kevin Anderson, for sharing his insights on the future of jorunalism
Brad Fidler, general amazingness in no one single definable way
Christian Payne, the best citizen journalist I can think of
Mark Rock and Karen Barber, Audioboo, needn’t say more
Suw Charman-Anderson, for Ada Lovelace day
Jim Hawkins, a BBC local radio person who uses new and old media to really connect with his audience
Calvin Harris, his twitter outbursts are quite wonderful at times
Anton Vowl, keeping an eye on the Daily Mail

For Save Our Sounds – go and record a sound from where you live and add it to the sound map at www.bbcworldservice.com/saveoursounds
For me? – a random act of kindness – for a stranger or someone in your life that needs cheering up. Go on, leave a bar of chocolate on someone’s desk, compliment a stranger, ring you mum… do it!