@HeatherinBC of Beautiful British Columbia is the ASE09 Blogger Lounge Mistress/Liason and will be happy to show you how much fun it is to use the XSHOT Camera Extender!

The XShot Camera Extender MUST appear in the picture you submit!

HINT: IZEA Insiders have XShots and many bloggers do as well 🙂

Upload your photos to Flick’r and/or Facebook and use the two tags, ‘xshot and ase09’ on each photo. Enter as many unique, unusual, silly or picturesque photos as you wish.

Perhaps you will be lucky and get a group shot of all the bloggers hamming it up with their XSHOTS.

Prizes: Your very own XShot Camera Extender, PLUS a link to you or your blog from each of the bloggers taking part in the contest (think about THAT for a minute!), as well as your winning photo on each blog.

Winning photo will be voted upon by the bloggers hosting the contest, and will be chosen based on creativity. Contest ends August 11 at 6pm Eastern and the winner will be notified via Twitter or email, so be sure to leave a comment with your contact details on this post after entering.

Perhaps you will see @BrettBum from There’s Something About Harry using his XSHOT to take a photo of himself and Lady Liberty.

@ConnieFoggles of Brain Foggles might be spotted taking group pictures with her XSHOT while eating pizza at the MarketLeverage John Chow dot com Pho Pizza Party. 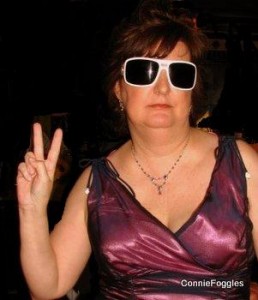 @Laurie_Pooh from La Vie de Laurie will surely have her XShot in hand while checking out the affiliate opportunities and all the fabulous SWAG in the Exhibit Hall.

If you spot @MurrayNewlands of Murray Newlands atop the Empire State Building with his XSHOT, you can bet he’ll be looking for King Kong!

@benspark (Drew) from Ben Spark should be easy to find with his XSHOT now that you’ve seen his mug shot 10 times at the side of this post!

XSHOT has provided a promo code, ASE09HBC for a $5.00 discount, so you may buy YOUR OWN XSHOT because “YOU deserve to be in the picture too!”

Good Luck finding the XSHOT users – and most of all have FUN taking pictures at Affiliate Summit and in New York City!