Connecting your brand with the Olympics’ audience

This year the Olympics are in London and people all over the world are cheering on their favorite teams. Companies are aware of the large audience and the potential for brand awareness. Some of them become an official sponsor and pay the 825 million Euros fee. But not all companies are willing to pay the fee to be official sponsors. They have set out other ways to be involved with the Olympics’ commercial market and find ways to be perceived as a sponsor would by the public.

Nike has one of the most recognizable brands and people are aware of it worldwide. This is probably a factor as to why they chose to not be an official sponsor. They instead developed a marketing campaign that connects with the Olympics. Using a theme of “Find your greatness” the ads show athletes from all over the world in places named London such as London, Ohio and London, Ontario. This way the worldwide aspect of the Olympics connects with other cities around the world named London and its athletes. It’s still expensive to buy airtime for the ad but it’s significantly cheaper than the 825 million Euros to be a sponsor. Nike still gets their ads seen and a brand awareness growth by airing in 25 countries. 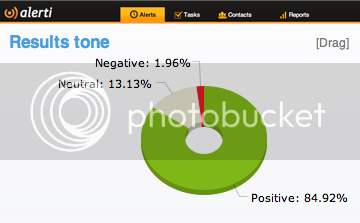 Here is a sentimental analysis on how people feel about the Nike ads which is overwhelmingly positive reactions.
*Graph created by Alerti

Companies can take notes from Nike and develop their own campaign that gets their brand seen by the Olympics’ audience. An option for companies is to buy advertisement space on Olympic event venues and commercial airtime. When creating the ad campaign try to center it on a sports theme even if your brand has little to do with sports. There are ways to work in a sports theme to an ad campaign so audiences can connect it with the Olympics.

Being an official sponsor is not necessarily the best option for some companies to connect with the global audience. One of the limitations companies have is that official sponsors can’t put up ads around the venues and aren’t officially associated with the games. Companies though are still ready to pay just to say they are official sponsors but people might not view their brand differently. After the 2008 Beijing Olympics the China Market Research Group did surveys on Olympic sponsorship and found that close to 80% of Chinese consumers said they didn’t care who were the sponsors. This might not apply to this year’s Olympics but for example Nike is already getting more attention than Adidas who is an official sponsor.

In this episode of “The Future of Engagement” Murray Newlands reviews Nike’s strategy advertising for the Olympics and ways other companies can follow their example.

Click on the free white paper here to get some information on social media monitoring that can help you focus your ads.