Progressive Insurance Corp. Case Study: How Not to Handle A PR Crisis 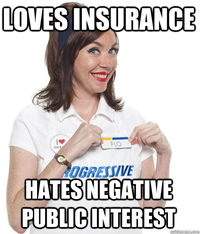 On August 13, 2012, Matt Fisher posted a blog on tumblr entitled “My Sister Paid Progressive Insurance to Defend Her Killer in Court” which almost immediately went viral and began a firestorm of negative discussion about the insurance company. Since his post, Progressive had to offer a rebuttal, the scandal became inspiration for several popular memes, and the discussion exploded on social media sites – eventually ending in Progressive feeling the heat and settling with the Fisher family.

In 2010, Matt Fisher’s sister, Katie, was killed in an auto accident by a driver who, according to every witness’ report, ran a red light. Katie’s killer was underinsured, but, Katie held a Progressive policy that was meant to cover expenses in the event that another driver in an accident was underinsured.

However, in spite of the policy agreement, Progressive declined to pay Katie’s family – and due to a Maryland law that prevents lawsuits against insurance companies when they refuse to pay under the policy for a breach of contract, the only way for Katie’s family to take action was to sue the other driver.

The Fisher family did not actually want to take the other driver to court, but, a jury ruling in favor of his negligence was the only legal next step in their attempt to pursue Progressive and force them to pay, as per the policy. Because of this fact, Progressive sent their legal team to defend the driver that killed Katie in order to save themselves from paying the Fisher family. 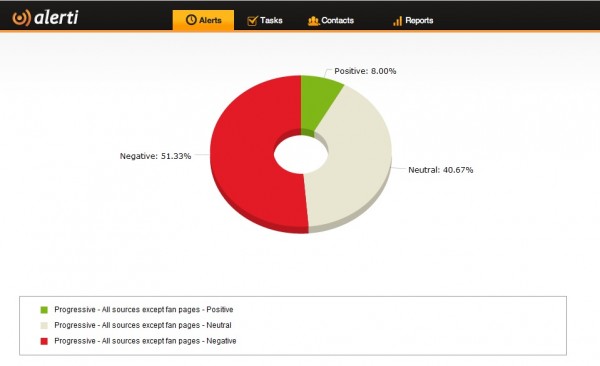 Graph by Alerti
Discussions around Progressive were 51.33 percent negative in the week since Matt Fisher’s post

Progressive’s attempt was unsuccessful, and the jury ruled in favor of the Fisher family – the other driver was determined to be negligent. Matt blogged about the situation on his tumblr, which was then reposted all over the internet, and Progressive was pressured to issue a response. In their response, the insurance provider claimed that they did not, in fact, represent Katie’s killer in court. However, diligent fact-checkers proved the claim to be false, and the PR nightmare for Progressive only worsened. 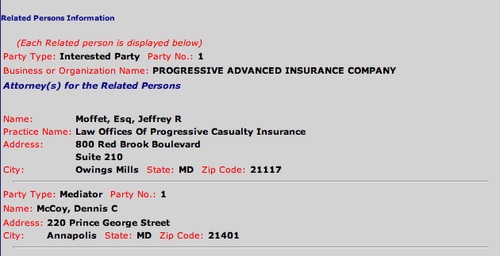 After Progressive made a rebuttal that they were not representing the defendant, followers of the case did some fact checking and determined their claim to be untrue. Image courtesy of theblaze.com

After another post by Matt, many news articles about the scandal, and a storm of social media criticism, Progressive finally agreed to settle with the Fisher family and pay the $75,000 requested – and then some. Progressive mishandled the situation in a way that will negatively impact the company, most likely for years to come – but, their mistakes provide an excellent example of what not to do when your business is in the midst of a PR crisis, as well as the power of social media publicity.

Graph by Alerti
Even with dozens of articles posted about the scandal, twitter ruled the online conversation with 99.33 percent of mentions.

Had Progressive simply paid the Fisher family what they were legally owed in the first place, they would have saved themselves the cost of the additional amount of the settlement, lawyer fees, and the unquantifiable amount of dollars lost from the countless customers canceling policies, as well as the policies that could have been. According to Marketwatch.com, over 1,000 people on twitter claim to have dropped Progressive as their insurance carrier in a four-day span last week, and another 1,600 expressed a desire to avoid doing business with Progressive.

When a crisis like this occurs, it’s important to get it handled and get it handled quickly – passionate complaints like Matt Fisher’s can create a huge stir of public outcry. Progressive fought hard to avoid paying the Fisher family the $75,000 they were legally owed, and in all their pushing and shoving managed to create and perpetuate a PR catastrophe. In order to avoid something like this happening to your business, use social media monitoring sites such as Alerti to frequently track conversations involving your company and handle any situation that comes up before it escalates to the level seen in the Progressive scandal.