If you love to travel or just travel often but didn’t catch it on Twitter, Facebook or Mashable last Friday, then you seriously missed out on a great half-off deal with Southwest Airlines. To celebrate reaching an admirable 3 million fans on Facebook, the airlines company offered half-off fall flights for fans that booked on Friday.

The deal applied to certain “Wanna Get Away” round-trip flights for the dates September 5th, 11th, 18th, 25th, October 2nd, 31st, and November 6th. Southwest Facebook fans were told to use the promotional code “LUV2LIKE” before midnight on Friday when they booked their flights online.

This is a great way to promote your brand, create engagement, and generate sales from social media. Not only did Southwest celebrate an important milestone for their company, they also made sure to thank their fans and reward them for their support. Something else that is crucial to note is that with the overwhelming response of fans trying to take advantage of this offer, Southwest suffered website performance issues and had some customers mistakenly get charged twice for their bookings. Rather than crumbling under pressure, Southwest held its composure and was in constant dialogue with their Facebook fans about solving problems and reimbursing customers who were double booked. They even acquired almost 150,000 more fans following the promotion. This is social media marketing at its finest.

So what can you take away from Southwest Airlines to help your business? Celebrate social media success, get your customers involved and create a promotion which drives sales as well as buzz to deliver ROI from your successes.

In this weeks episode of the Future of Engagement, Murray Newlands further discusses Southwest’s successful marketing campaign and what you can learn from its example for your brand. 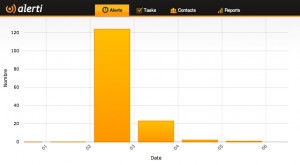 The social media monitoring tool Alerti was used to make the graph above that shows the peak in conversation about Southwest with their promotional code offer. Alerti is a great tool for bloggers since it lets them see what people are saying on certain topics through different social media platforms

If you are interested in doing social media monitoring for yourself, click on the white paper below.