Scott Richter the past the present and the future of online marketing. Scott has grown Media Breakaway and the affiliate.com network into arguably THE biggest affiliate power house in the world, outside of Google that is 😉 . 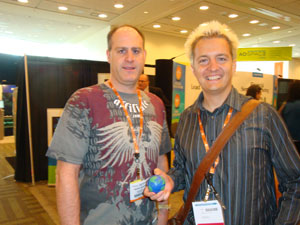 Scott Richter – Not without controversy, making a TV appearance on the Daily Show, and featured in Details Magazine, People Magazine, Time Magazine, USA Today, the New York Times and many more magazines and newspapers from around the world. Like Apple and Oracle he has had his run in with Microsoft. Yet, despite the challenges he and his team have faced, and maybe in spite of this, he has developed a global empire. I was told Scott does not do interviews so I feel honored to have been given the opportunity to interview him for murraynewlands.com. If you have additional questions let me know I am hoping for a follow up…

Q: Scott Richter, tell me about Media Breakaway. What is it doing right now?

With the affiliate.com Affiliate Network?
A: affiliate.com is continuing to grow nicely but the pace has slowed from levels back in the heyday for the industry. With more than 750 affiliate networks out there now, it is becoming a much more packed market place.

With email?
A: We are still going strong in email, but the business is more complicated with different filtering by ISPs and block lists. The key is building a super-clean double confirmed email list that you can send to daily without any issues.

With mobile?
A: We purchased a mobile company several years back and we have grown turned that into MBmobile, LLC – a powerhouse of unique offers with many more in the pipeline. Our newest release was RingnRock.com (a new mobile storefront), which so far has been doing amazingly well in private testing with super affiliates.

Social media and apps?
A: This is one of the fastest growing areas on the Internet, as more and more people globally get addicted to social networking sites to find out the latest info on their friends and families. Not long ago we launched our app division (Lunatic Games) which has come out with several smash hits like http://apps.facebook.com/spotthedifference/ and http://apps.facebook.com/canyouspotit/.

Q: Scott Richter where did it all begin for you?

A: I launched Optinrealbig.com / saverealbig.com back in 2000 working out of the back of one of my restaurants. We started out as a company selling pagers and then evolved in to marketing other products like Ginsu knives, spy ears, laser pens and even American flags. Over time as the Internet grew, we continued to change what we did and eventually got into email marketing. Then in 2003 we launched the CPAEmpire.com Affiliate Network – which we re-branded it in 2008 as affiliate.com. Along the way we also launched a hosting company called WholesaleBandwidth.com, a domain registrar called Dynamic Dolphin and an email list management division called DataOverdrive. We also acquired Opera Telcom USA in 2007 (which helped us for MBmobile) to help us do more business in the ringtone and mobile space. We have launched several successful mobile brands like Ringtones.net, Tone.com and RingnRock.com.

It has been a rough and challenging ride over the last 9 years, but as with any business, that have been many downs (lawsuits and bad press) but also lots of high points to that make it all worthwhile.

Q: Scott Richter where is the future of affiliate marketing and where do you see media?

A: Affiliate marketing will continue to grow. Especially as times get harder, companies are looking at CPA deals more than ever before. Advertisers can’t lose when they are only paying on a performance basis.

Q: Scott Richter what are the main things affiliates do that you wish they wouldn’t?

A: Normal affiliates who run offers are terrific, but the ones that are fraudulent or deceptive hurt all of the good ones by causing all sorts of issues for advertiser and charge backs for affiliate networks. I wish there was a good way to get rid of all the fraudulent affiliates.

Q : Scott Richter what are you most proud of?

A: I’m very proud of how we have come so far and grown the business over the years. Outside of work, my Twin boys Michael and Joseph make me the proudest and just like their Dad, they our following in my footsteps by playing hockey.

Q: Scott Richter Doing the Daily Show Video obviously brought you a lot of publicity and notoriety, any regrets?

A: The Daily Show spot was one of the best things I ever did. The press coverage from it was tremendous. What a lot of people don’t know is that it was all staged and scripted and that the email address given out on the show ([email protected]) wasn’t really my email address. But after airing on the show the account got over 25,000 emails sent to it. Even a few dating offers. 😉

Q: Scott Richter Shawn Collins just released a survey that over 51% of affiliates now collect optin databases, is it true you and your team still send over one hundred million emails a day?

A: I’m not sure if the number is accurate across the entire industry, but I do know a lot of affiliates do collect data. While we are still involved in emailing, we don’t send anywhere near as much mail these days.

Q: Scott Richter  there was a rumor that you were going to sell last year for over $100 million, any truth in that?

A: Over the last several years we have received a number of offers from companies interested in acquiring the company, but so far nothing has come to fruition.

Q: Scott Richter today it you had to bet it all on shares in Myspace, Facebook or Twitter, where do you put your money?

A: I think Facebook, its slick and clean. Myspace is too cluttered and geared to a younger crowd that doesn’t have the same spending power. Twitter has a lot of potential, but Facebook can wipe them out if they ever launch their own internal Twitter-like program.

Q: Scott Richter what do you do to improve the world?

A: Here at Media Breakaway we have our Media Breakaway Makes a Difference Program where we run several projects a year to support the local community. Some of the ones that stick out the most for me in the last year were initiatives supporting Habit for Humanity, the Salvation Army Giving Tree and the Food Bank of the Rockies. On a personal side, I participated in the Muscular Dystrophy Association Lock-Up Event and raised over $16,000 to send 20 kids with Muscular Dystrophy to summer camp for a week here in Colorado.

Q: Scott Richter what do you do that is green?

A: We have Blue recycling bins next to all of our desks to recycle. We stopped giving out disposable cups and went to only washable mugs and also did away with bottled water and went to a bulk water system with water coolers located throughout the office to cut back on waste.

Q: Scott Richter  what is one thing about you that not many people know?

Q: Scott Richter  who would recommend you and why?

A: Missy Ward – She worked with us for several years and is like an older sister to me that somehow keeps looking younger and hotter every year. 😉
Jeremy “ShoeMoney” Schoemaker – Jeremy wasn’t always my biggest fan, but after getting to know us last year has become a good friend.
Dennis Yu – Dennis liked us so much that he moved his company down from Boulder into office space in our building.

Q: Scott Richter what one thing can people do to help you?

A: Affiliates can really help us by letting us know what offers they want us to provide through affiliate.com. We are always happy to go after new offer that can help our affiliates make more money.