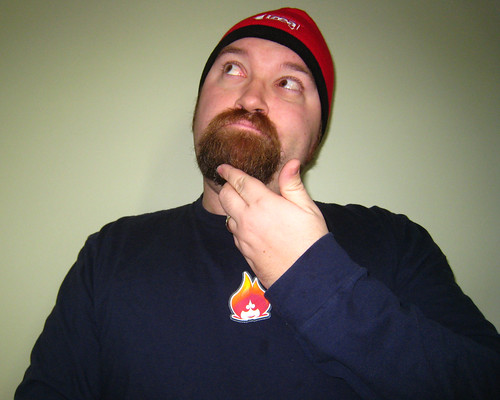 Today MarketLeverageTV becomes the MarketLeverage TV Network with multiple shows. And during the debut episode of WrapUp the winners of BenSpark’s Ultimate IZEAFest Prize Pack Contest will be chosen.

This contest sprang forth from the mind of Drew Bennett – AKA BenSpark (@BenSpark) after writing his list of 10 Essential items to bring with you to IZEAFest. While writing that post Drew was thinking about all the conferences that he’s attended over the years and the things that were essential to a blogger at each event. His dream was to be able to provide those items as prizes to a lucky blogger who will be attending IZEAFest 2009. That along with his 10 Reasons to Attend IZEAFest 2009 gave him inspiration to ask for help in making his dream of giving a great prize pack to some lucky bloggers a reality.

So Drew went out and asked multiple sponsors for help. He is an IZEA Insider for the “I’m Not A Famous Blogger” Crew and as such was provided with tickets to IZEAFest. So prize number one was taken care of. You can’t have an Ultimate IZEAFest Prize Pack without a ticket to IZEAFest. From there Drew recruited the generous help of Dina Riccobono (@MLDina) and MarketLeverage (@MarketLeverage) who provided Drew with an Asus Eee PC 1000HA and a Flip Mino HD that is Co-Branded BenSpark.com and MarketLeverage!

Early on when Drew started his search for prizes he made a request from ZINK Imaging who gave him two Polaroid Pogos and 200 sheets of ZINK Paper. He uses one of them to create unique Business cards. When Drew meets you he asks you to take a photo with him using his Xshot. He then prints out an instant photo with his Pogo on ZINK paper and sticks it to the back of his business card. Drew is donating one of his Polaroid PoGos to the winner. He also secured An Xshot for each winner because there are two runner up winners who not only get IZEAFest Tickets (A fantastic and valuable prize in its own right) but they will each get a smaller prize pack.

Drew’s friend Michael at Xshot hooked him up with a business contact in the Flipbac Innovations Company and they kicked in some Flipbac (@flipbac) angled viewfinder and LCD screen protectors for digital cameras as prizes. Each Runner up gets one of those and Drew has a few extra to give away at IZEAFest.

To keep people going all weekend long Drew was able to get a case of BluFrog Wildly Healthy Energy Drink donated by Martha Decker (@MarDeck). He is also including energy drink packets from EBOOST (@EBOOST). Drew will have close to 100 packets to give away at IZEAFest 2009, come find him for one. Runner up winners also get an EBOOST prize pack.

Still not quite sure that he had the Ultimate Prize Pack for an IZEAFest attendee Drew sought out something innovative and cool that would reflect the fun open spirit of learning and networking of IZEAFest. He found the perfect prize in the Poken. Drew asked a question on Twitter about whether the Poken was worth the money and the call was answered by @PokenGirl. PokenGirl explained that the Poken is a device that one can use to connect with other people physically by slapping a “High 4” with that other person’s Poken. What that does is exchange a digital business card that contains your online social media profiles. Since IZEAFest is all about learning, having fun and making connections with other people a Poken is a great prize that will be going to each of the winners. They even get to choose which of the cute little Pokens they want.

With the Prize Pack Assembled Drew only needed to find some willing judges and he did at Affiliate Summit East. First he recruited Famous Blogger Murray Newlands (@MurrayNewlands), then “I’m Not A Famous Blogger” crew member Tim Jones (@Timothy_Jones) or rather The Real Tim Jones. He also recruited Eric Schechter @ericschechter of ClickBooth and last but not least he recruited Kim Ann Curtin (@KimAnnCurtin, Life Coach to the Affiliates.

The Judges had a difficult task ahead of them. There were four bloggers who went that extra mile to try for the Ultimate IZEAFest Prize Pack. Those folks along with the many others who entered the random drawing are waiting on the edge of their seats until WrapUp airs on the MarketLeverage TV Network Monday Morning 10:30am EST.